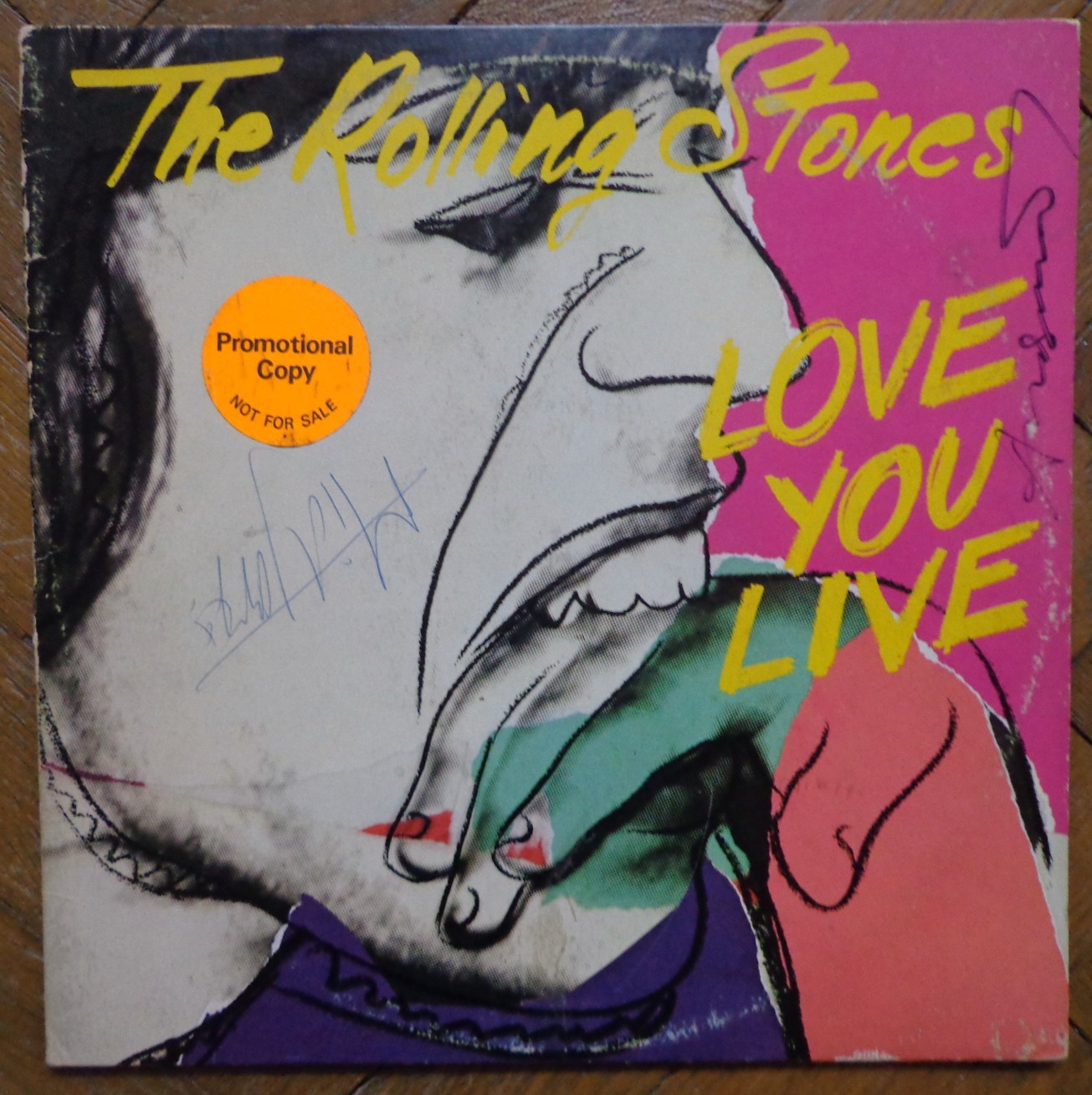 Sometimes you need a bit of luck, to find a really great piece for your collection. Like this copy of The Rolling Stones’ Love You Live, that was for sale on eBay about three years ago. The front cover has an orange promotional sticker, and is signed by Mick Jagger and Andy Warhol. The seller did not recognize Warhol’s signature, though. It was advertised as “Signed by Mick + 1”, and the description said: “Jacket has some ringwear, a piece of old tape on back, and (obviously) some writing. Autographed copy of this Stones release, one signature is obviously Mick Jagger, can’t make out the other one.” 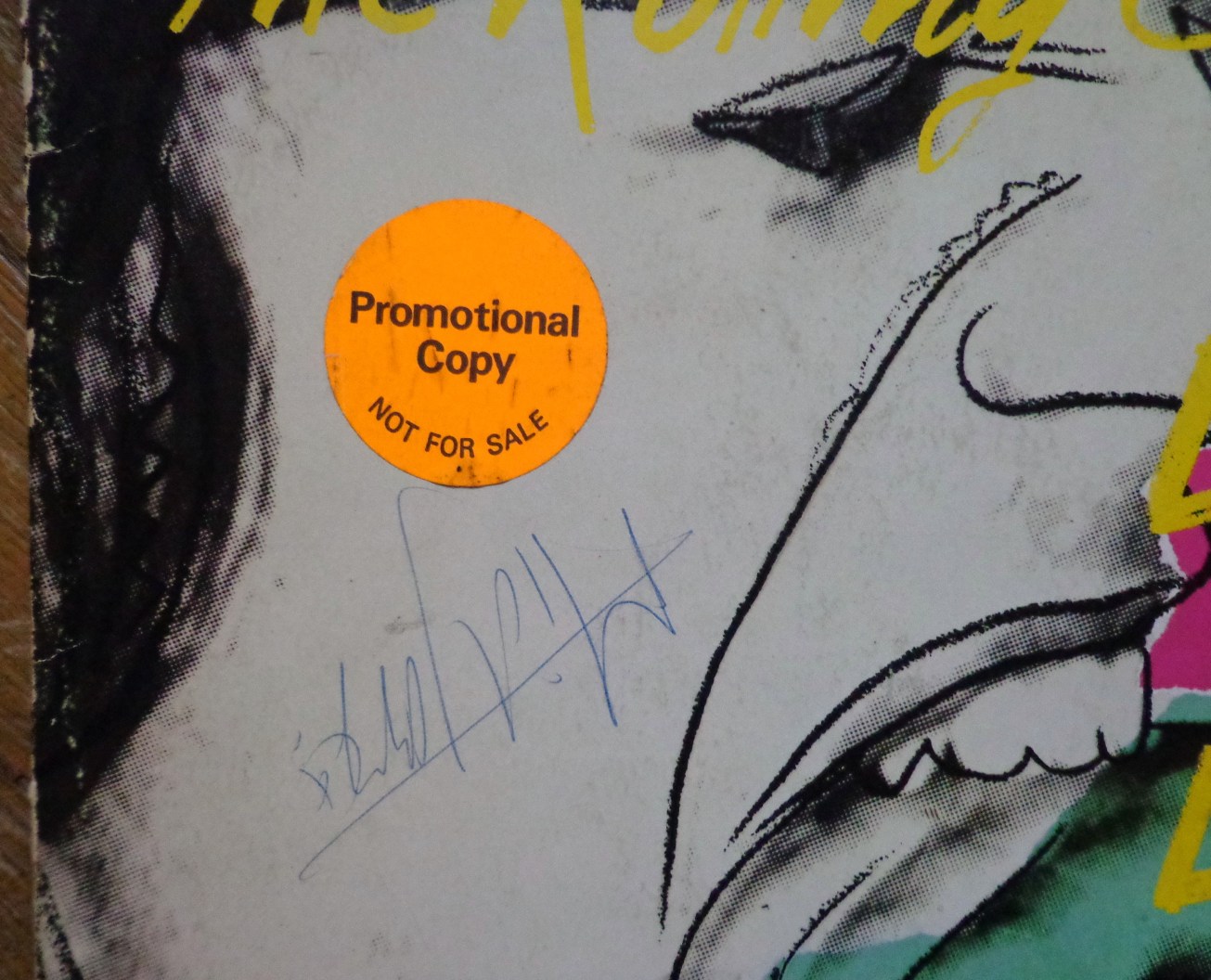 Well, tough luck for the seller. As a result there were only two bidders, I was the highest bidder with $360, which is a steal. There is no doubt that this record was signed during the launch party in the Trax club in New York, on September 27th, 1977. A record signed at the Trax not only by Jagger and Warhol, but also by all other Stones, was for sale at the notorious music shop Record Mecca a while ago. Asking price was $10.000. It was sold in a jiffy.

There are a lot of pictures of Warhol and Jagger in the Trax club, sitting next to each other for the signing. Although Warhol never liked the final result of the cover of Love You Live. It is well documented that he disliked Mick’s handwriting on the front cover. In Warhol’s opinion it should have been a front cover with no lettering at all – like the cover of Diana Ross’s Silk Electric – so that when you framed the cover, you would have a real Warhol on your wall. Some pictures of Warhol and Jagger at the Trax are well known, nearly iconic, but once in a while rare pictures turn up like this contact sheet of pictures made by press photographer Terence McCarten: 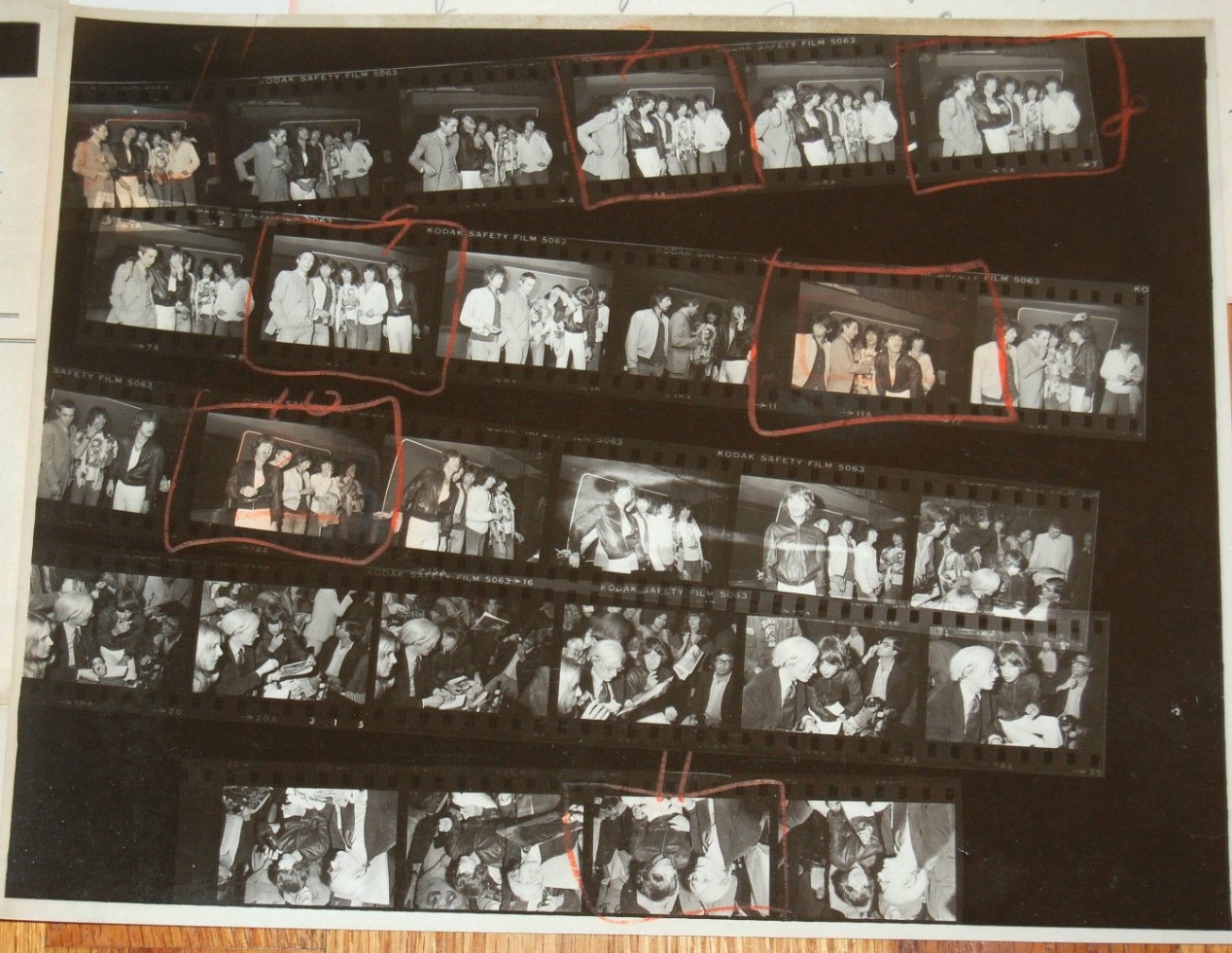 These pictures are interesting in many ways. The man with the glasses sitting at the right, is Bob Colacello, who was the editor of Warhol’s Interview magazine. In one of the pictures you can see clearly that someone is holding a poster of the Love You Live cover, waiting to be signed.

This type of poster often turns up on eBay or other sites: it has the original artwork of Love You Live, without lettering, how Warhol intended the cover to be. It’s printed on cheap newspaper-quality paper, and on the back is the text: “An Andy Warhol poster courtesy of Rolling Stone Records.”  I have wondered for years who has issued this poster. It is not included in Paul Maréchal’s catalogue of commissioned Warhol posters, probably because the source of it was unknown. 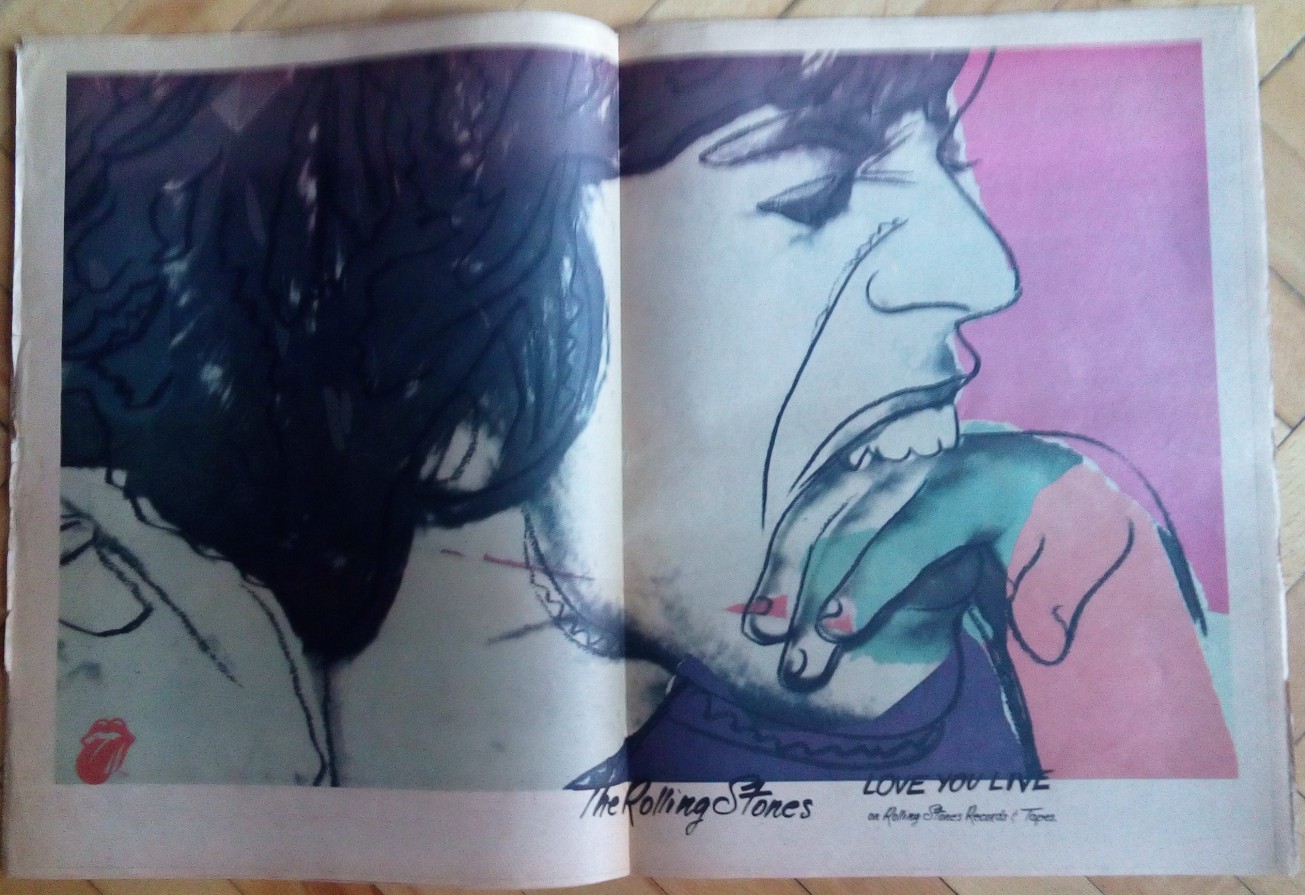 But two/three months ago I found the answer: I bought on eBay a copy of Interview Magazine, the issue of October 1977. In the centre of this magazine was the Jagger poster. There is no reference in the magazine to the poster, nor is there a reference on the poster to the magazine. But the little pinholes made by the printing press to grab the paper, are a match. And it also completely makes sense: Warhol did not like the cover with lettering, so he offered the version he preferred in his own magazine… 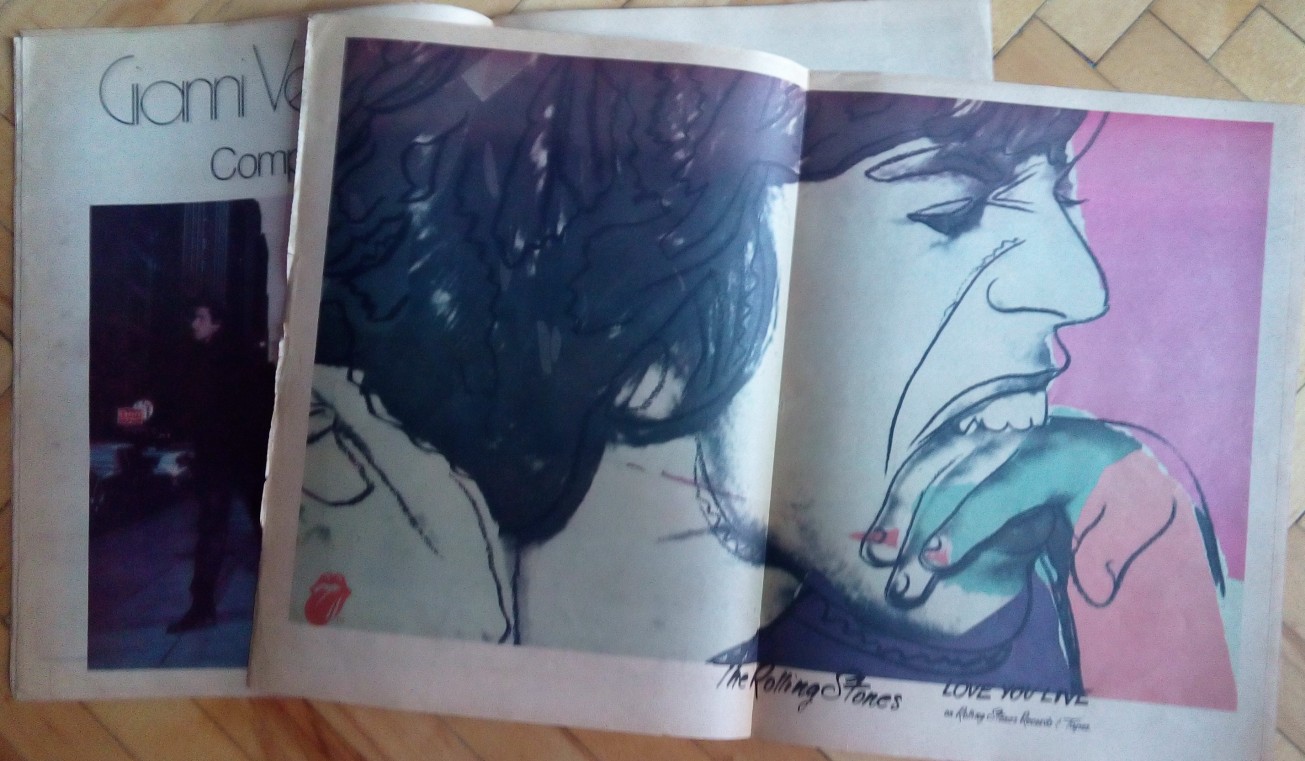 I would like to end this post with a side note about this particular magazine issue, nothing to do with the Stones cover, but very funny. Warhol and his Factory (or at that time rather called The Office) were a very commercial enterprise, as we all know. So in this issue of Interview – as probably in all other – were a lot of coupons for stuff you could order by mail. Turns out that a signed book by Warhol was cheaper than a T-shirt. You could order a signed copy of The Philosophy of Andy Warhol (From A to B & Back Again) for $7.95, while a T-shirt with Andy Warhol’s BAD (the movie) cost $8, and a shirt with the logo of Interview was $11. Isn’t this great?

2 thoughts on “The Rolling Stones: Love You Signed”