Never in my wildest dreams did I imagine to write a post like this: I was able to add an original Night Beat box to my Warhol cover collection, and on top of that also the fabulous Voices and Events box, of which no one knew it existed, until very recently. In fact at the moment it is the only copy that I know to exist. Both boxes were released by NBC radio in 1950, as a promotional item sent out to companies, to convince them to become the sponsor for said radio shows. So this will have been a very small edition.

Night Beat was a ‘radio play noir’, with Frank Lovejoy in the leading role as newspaper reporter Randy Stone, solving mysteries and crimes. Voices and Events was a news show, using tape recordings with the actual voices and statements of world leaders, politicians and other people in the news. That was quite a novelty in those years. Narrator was James Fleming, who would later launch the Today Show on NBC television. Both boxes contain  a complete show on three 7″ records. Night Beat on blue vinyl, numbered EO-CX-342 until 347. Voices and Events on black vinyl, numbered EO-CX-358 until 363.

A short history of the events that lead to the discovery of these boxes, starts with fellow collector Richard Forrest in Sweden, when he bought the catalogue for the Australian exhibition Adman, Warhol Before Pop. Richard noticed an item in the catalogue, a print of Voices and Events, that clearly looked like the cover slack of a record box similar to Night Beat. Very excited about his discovery he shared the news, and immediately started to make facsimile copies. I wrote about this in my blog, and just like Richard I wondered if the Voices and Events box had been produced for real, or if just a printing proof existed.

About three weeks after I wrote the post, in March, I received a message from Mr. Lou Mancini from Phoenixville, Pennsylvania. He claimed to have found vintage Voices and Events and Night Beat boxes a couple of years ago, including the records. When he sent me some pictures, it was immediately clear that these were very real indeed. Lou Mancini was planning to sell the boxes, and his research to their history and value had lead him to my blog. And of course, immediately to an interested buyer. Since Lou now had read about the Warhol involvement and the rareness of the items, some time and talks were needed to close the deal.

When the deal was closed, I asked Lou to send the boxes to my friend and art collector Frank Edwards in Michigan. A few weeks later I flew over to the US to pick up the records. To celebrate the historic find of the Voices and Events box, Frank opened a bottle of champagne. During my short stay, Frank showed me around at the Cranbrook Art Museum, where he is a committee member, and also guided me through the highlights of Detroit.

Frank Edwards (right) and me with the two NBC boxes, and champagne.

The two boxes are basically made the same way, with an advertising text inside, and the white dots at three sides (top, right and bottom). On both covers the lettering of the titles is slightly raised. The surface of Voices and Events is very shiny, where the Nigh Beat cover is not. On Voices and Events you can also feel the black drawing of the two reporters with your fingertips, so maybe the drawing has been screenprinted.

The glossy cover of Voices and Events. Raised lettering, and also the drawing itself can be felt.

You could become sponsor of the news show for “$2500 net per week”. 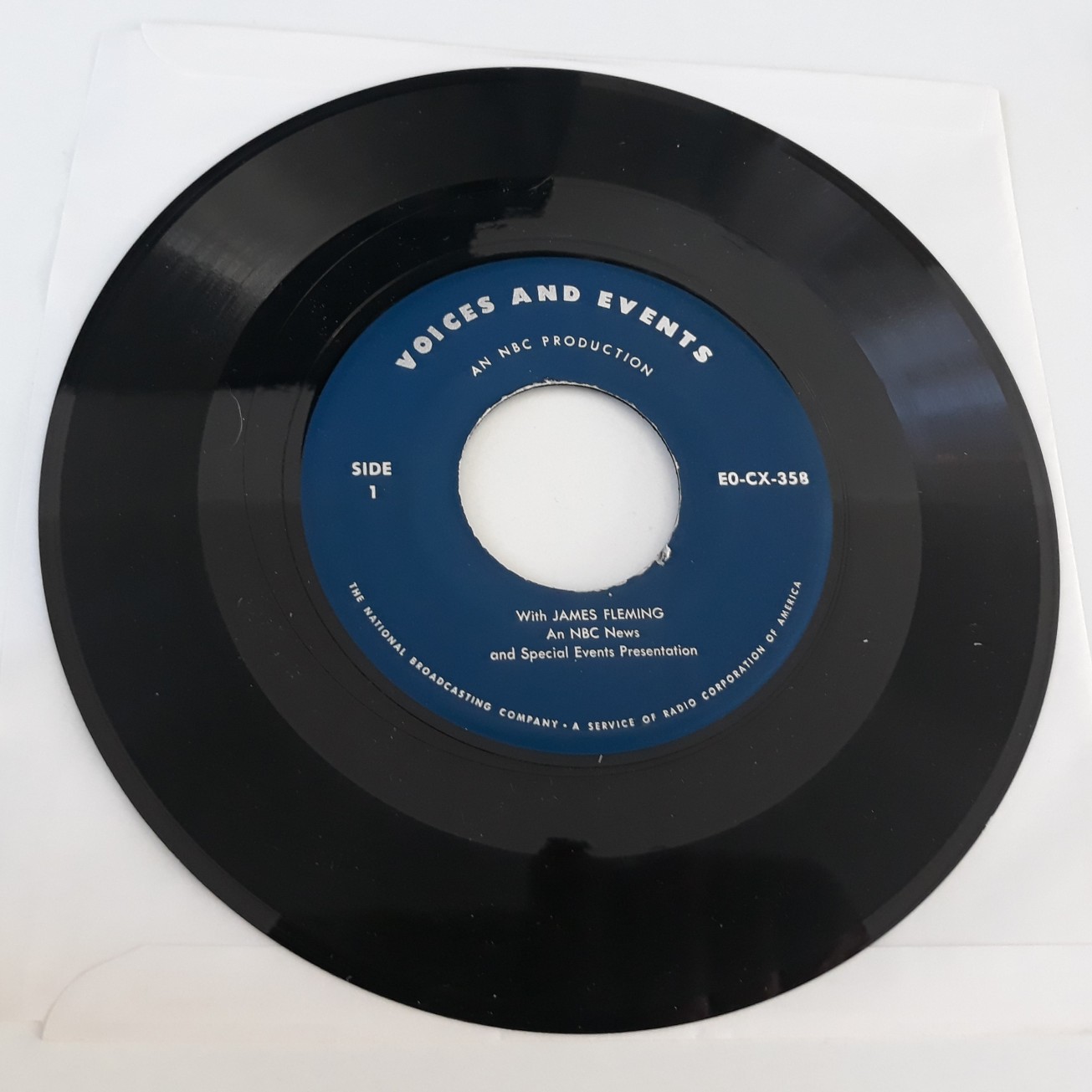 (After 10 years of searching, finally…) My copy of the Night Beat box. 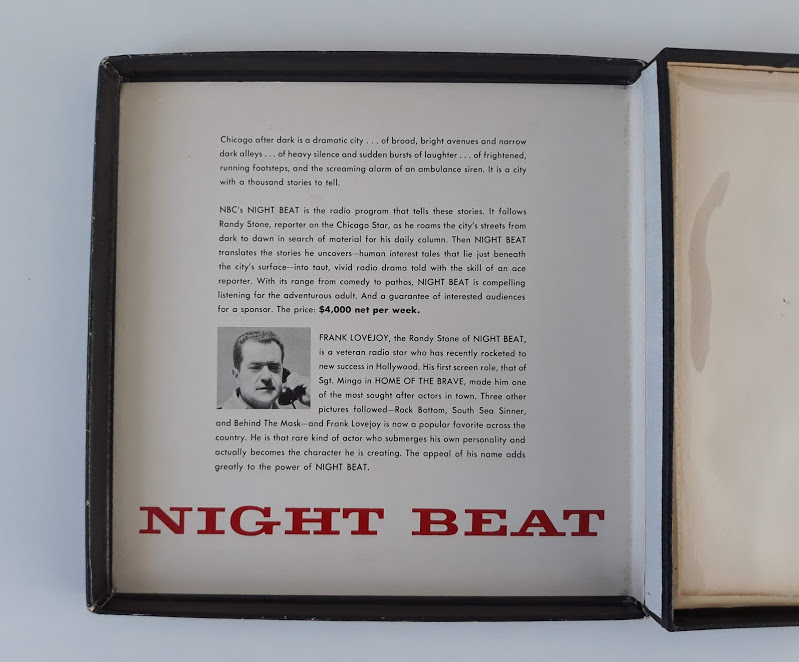 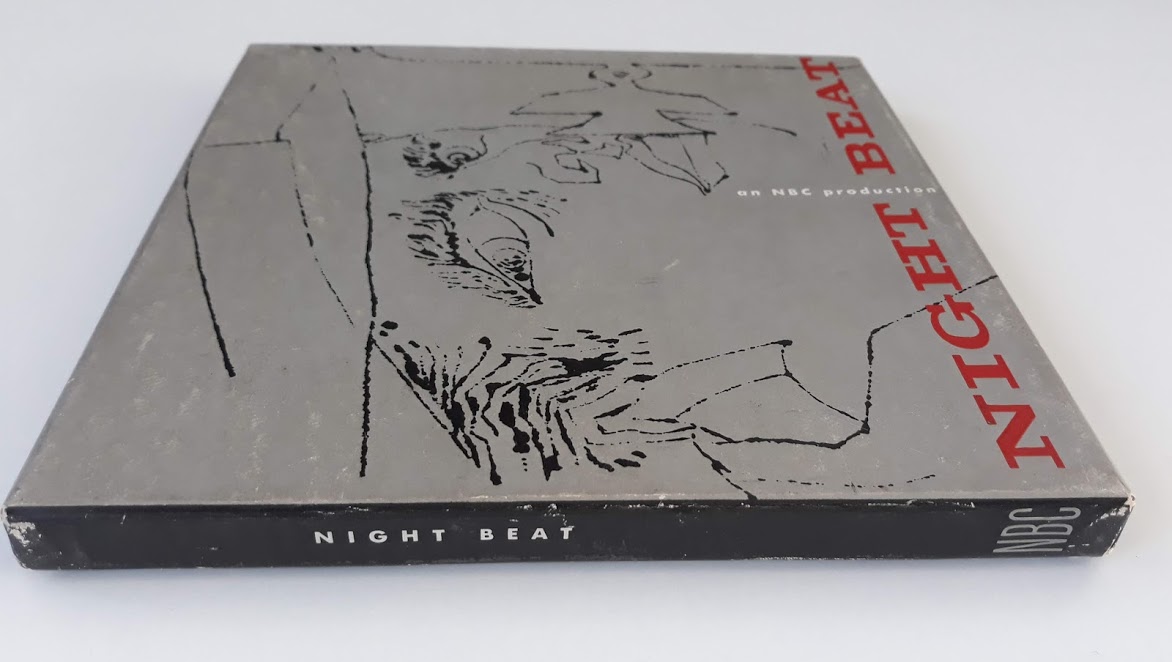 7 thoughts on “Voices and Events: toast to a newly discovered Warhol cover”