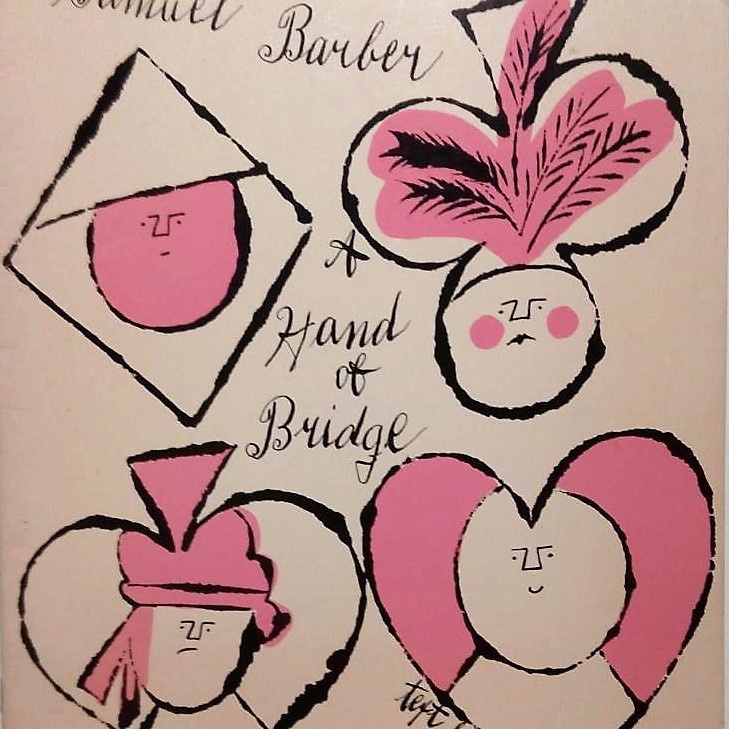 Once more a post that’s not about record cover art, yet again music is very much involved. At least four times Warhol art was used on the cover of printed sheet music. In the case of the mini opera A Hand of Bridge the cover was exclusively designed by Warhol for this booklet. For the other three the cover art and portraits that were made for albums by The Rolling Stones, Diana Ross and Aretha Franklin, were adopted and adapted,

A Hand of Bridge is a very short chamber opera by Samuel Barber (music) and Gian Carlo Menotti (libretto), who were friends of Warhol’s. Perfect for haters of opera, it only lasts for  about nine to ten minutes. It premiered in 1959 in Spoleto, Italy and a year later in the US. In 1960 the sheet music was published by G. Schirmer, New York. If you want to have an early original copy, be sure the line “G. Schirmer, New York” is also written in Julia Warhola’s hand writing (Warhol’s mother), as is the price of $2.50. Later copies will have higher pricing, the name of the publisher in a different font and the most recent ones even have a bar code at the back cover.

The piece is quite popular, and still gets performed regularly. Most of the copies that turn up second hand are indeed well used, often with handwritten stage notes and remarks. In one of the copies I have found, there was even some censoring in the libretto in the part of ‘Dave’:  “If I could be as rich as Mister Pritchett, the bastard” was changed to  “…, the old coot” -“Twenty naked girls, twenty naked boys” was changed to  “Twenty sexy girls, twenty servant boys” and “Lying in a bed of naked bodies” became  “Lying in a bed of silken bodies.” True story.

Warhol’s drawings with so called sprite faces in the form of hearts, clubs, spades and diamonds were made for this booklet exclusively. Even other versions and proposals for the cover art exist. Warhol also designed stage plans and costumes for another opera by Menotti, Introductions and Goodbyes.

Front cover of A Hand Of Bridge.

Back cover of A Hand Of Bridge. 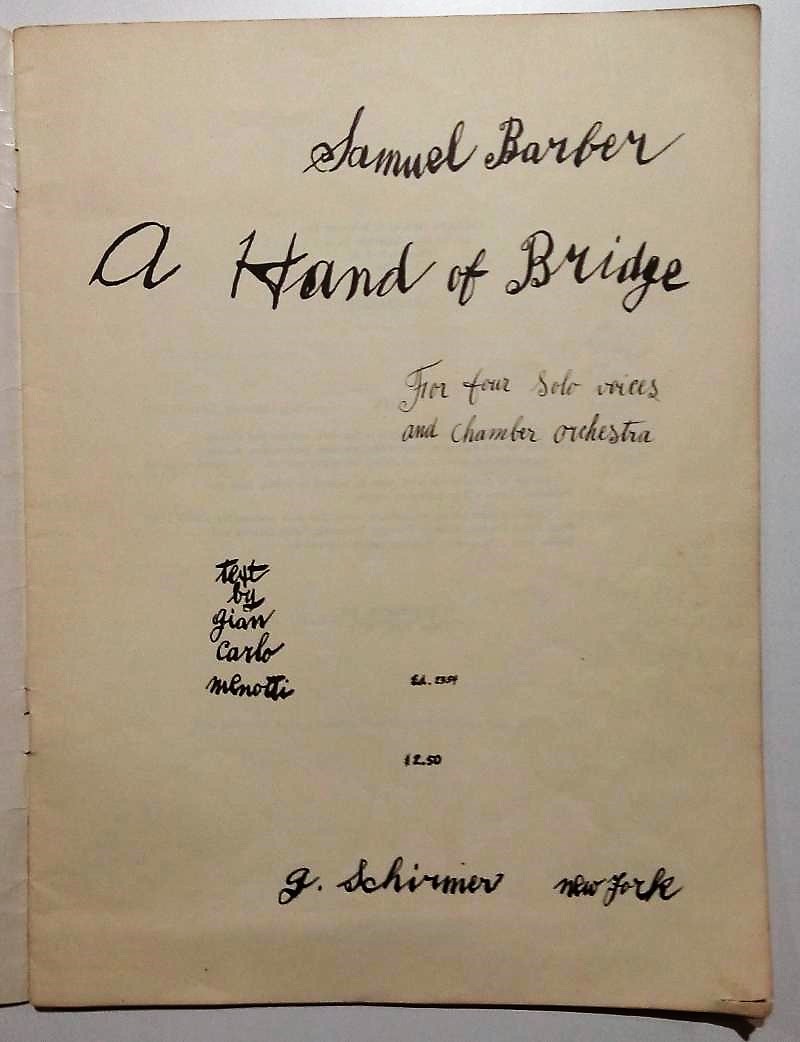 Title page with name of publisher and price $2.50 handwritten by Julia Warhola.

Sheet music for the Stones’ complete album Sticky Fingers was published in the US by Abkco Music and in the UK by Mirage Music. It’s remarkable that for both versions the original black and white Warhol picture of the mystery guy in jeans was used. No zipper in any form was added. 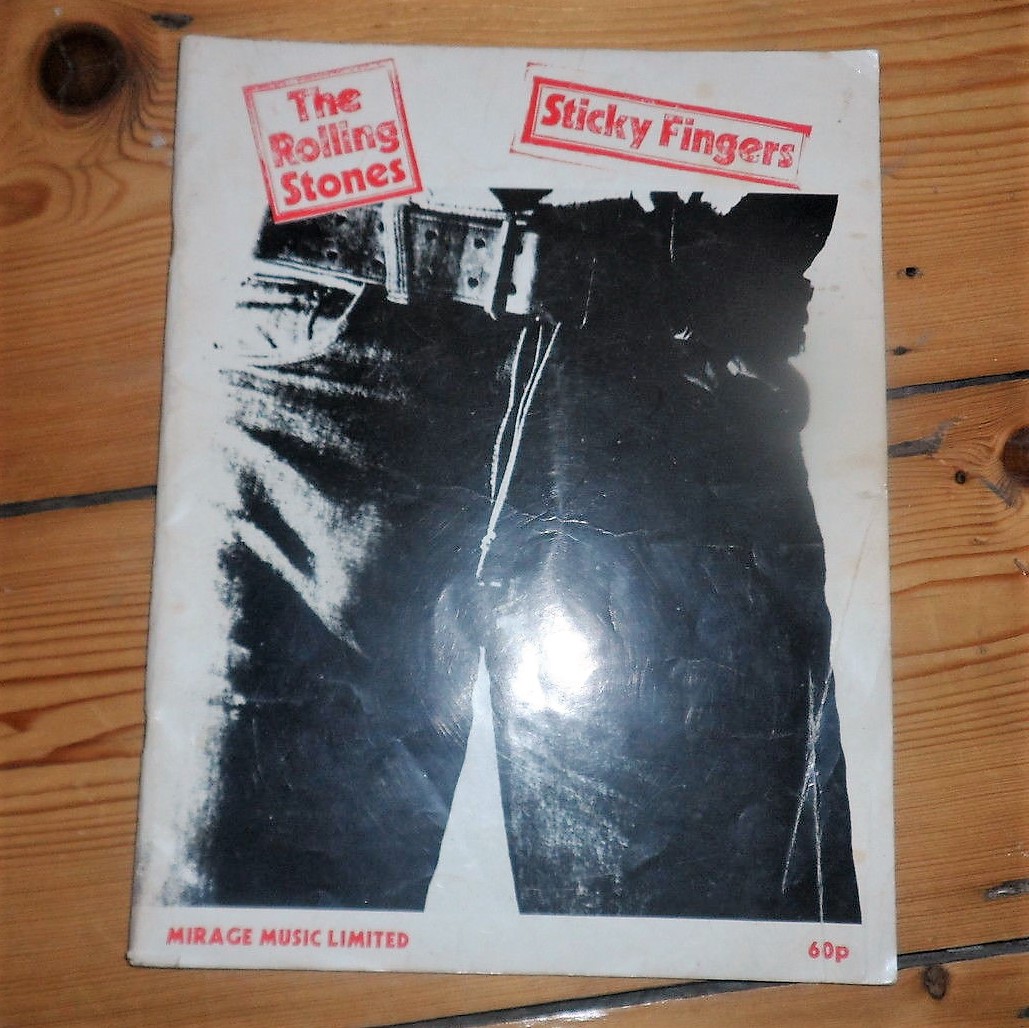 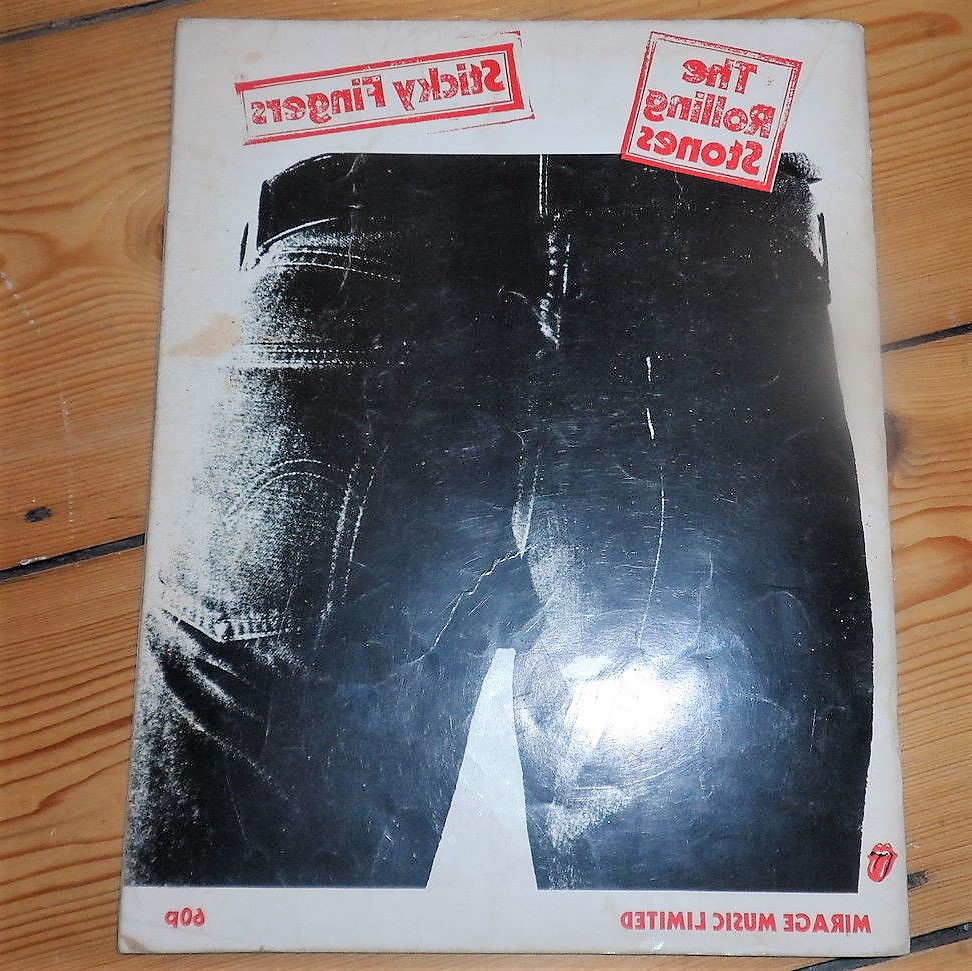 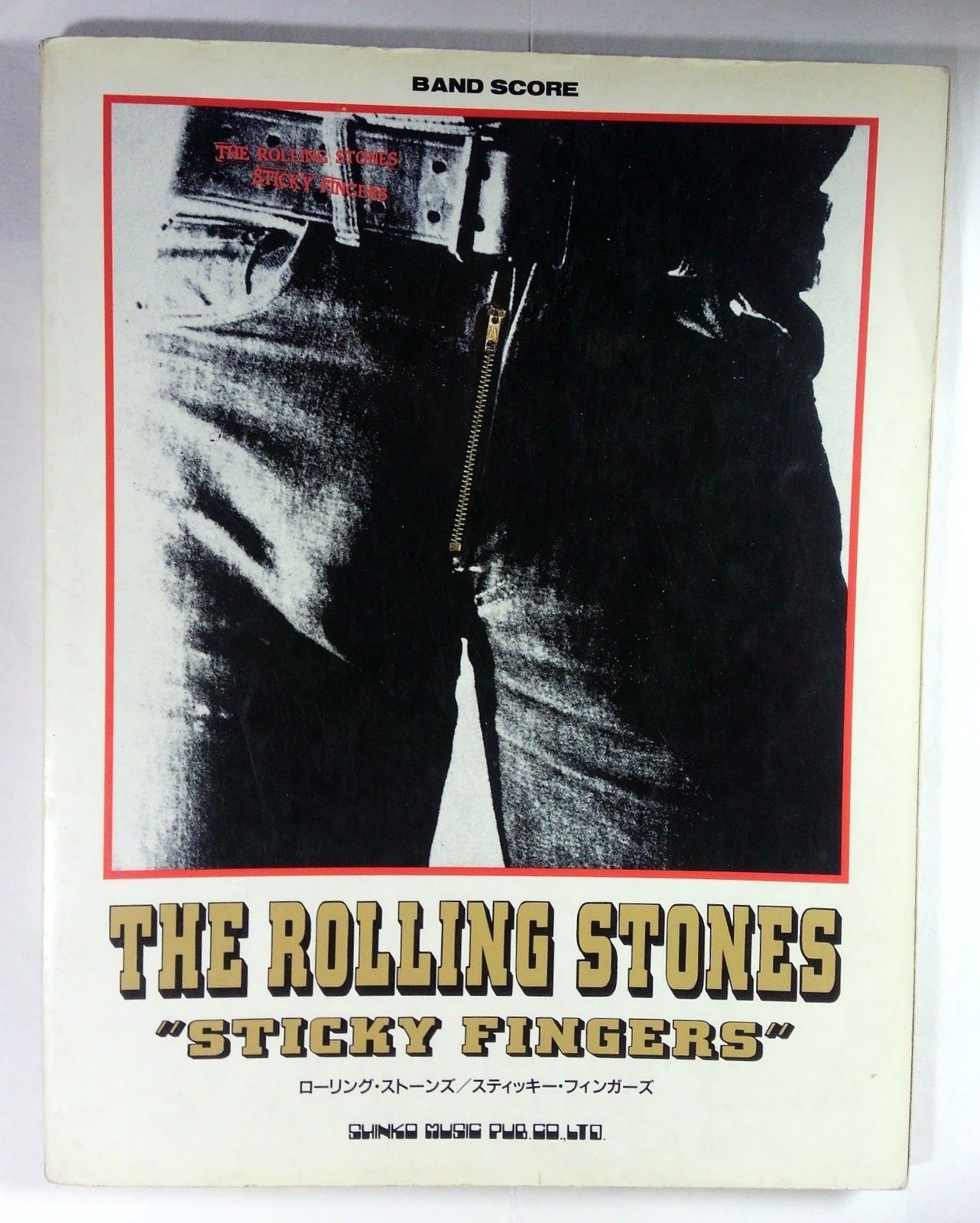 Sheet music for hit song ‘Muscles’, written for Diana Ross by her good pal Michael Jackson, 1982. Cover art is the same as the 7″ record Muscles., a cropped version of the portrait on the cover of the album Silk Electric. 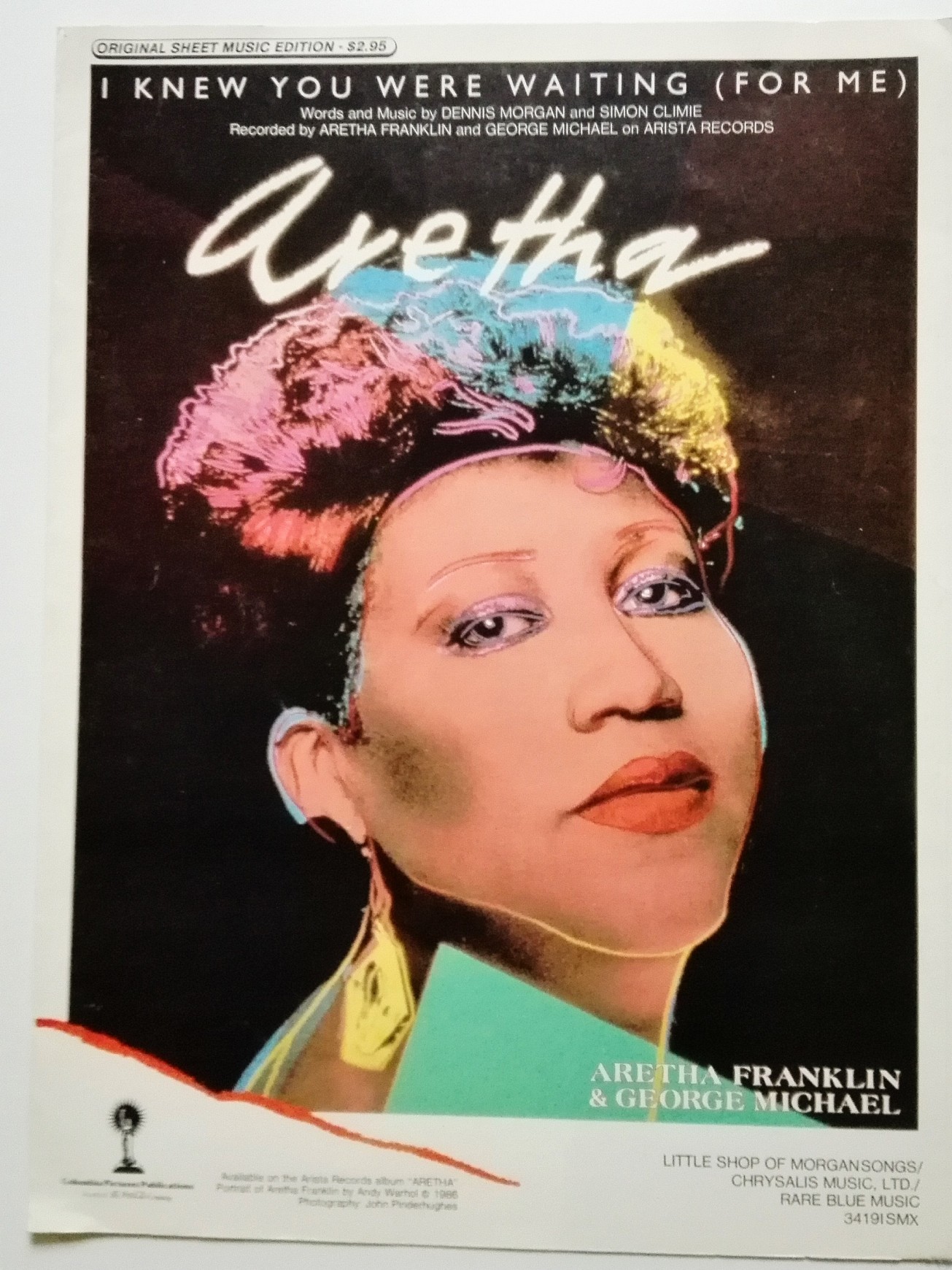 Original sheet music for Aretha’s I knew you were waiting (for me), a hit duet with the late George Michael (1986).

One thought on “Warhol note by note: sheet music covers”