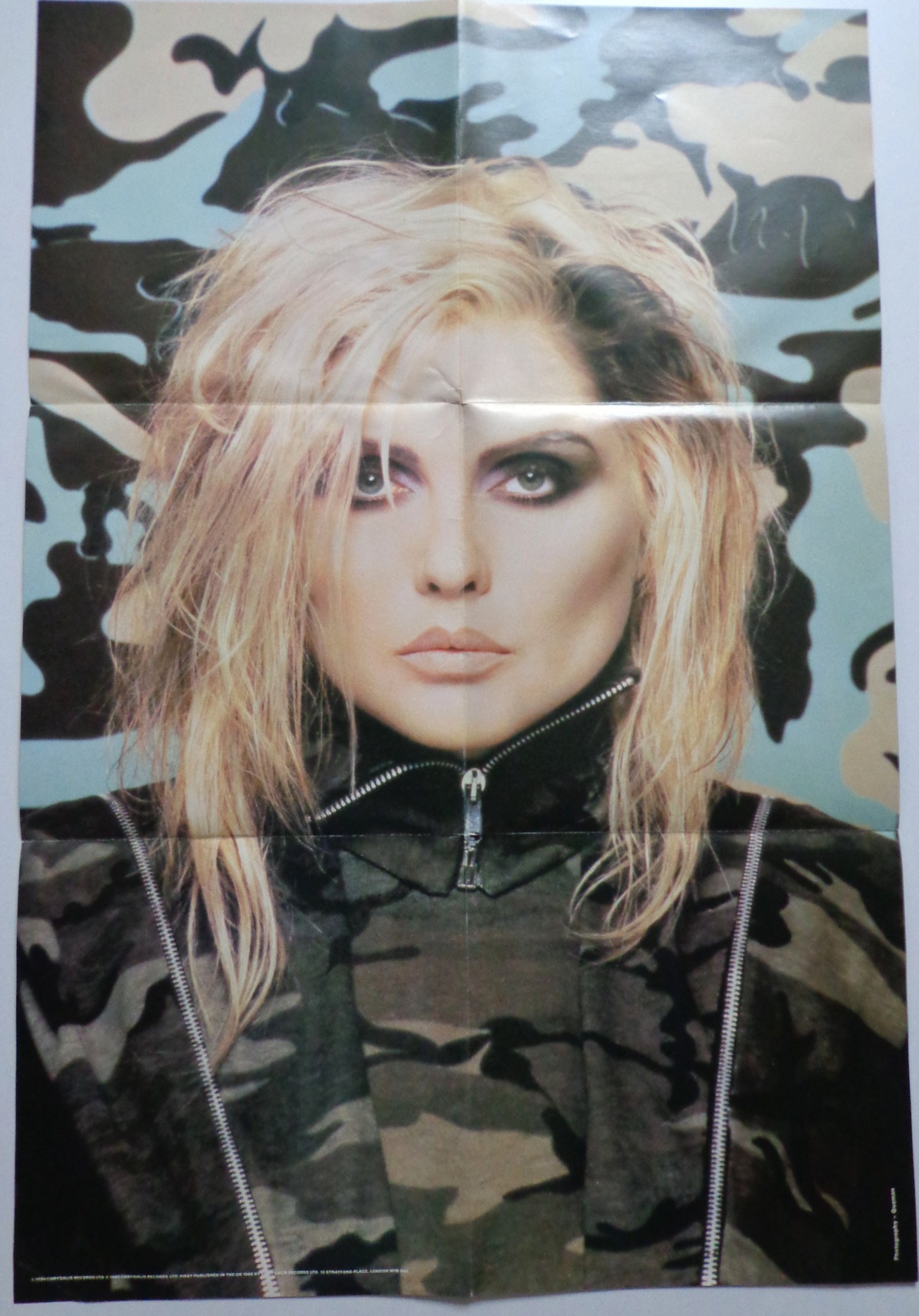 The power of being Andy Warhol. Not being commissioned for the cover design of an album, and yet having your stamp of approval all over it. I’m talking about the album Rockbird by Debbie Harry, released in 1986. The second solo album by the front lady of Blondie, who also happened to be one of Warhol’s muses. His 80’ies Marilyn Monroe, so to say. With the only difference Deborah was (and still is) very well alive.

The lettering on the album is done by Sprouse, in his 4 signature marker colours yellow, orange, green and pink. Same colours and lettering he used for his Graffiti series of bags and T-shirts for Louis Vuitton. And also a book about Sprouse is issued in four similar coloured covers.

In fact Warhol was quite impressed by Sprouse’s cover design for Rockbird, and in particular the writing. In the entry of September 3, 1986 in the Andy Warhol Diaries he noted:  “(…) Stephen Sprouse came and brought me the Debbie album he did the cover for and it looks great, clever, he really is a good art director, he knows how to use his handwriting and everything.” 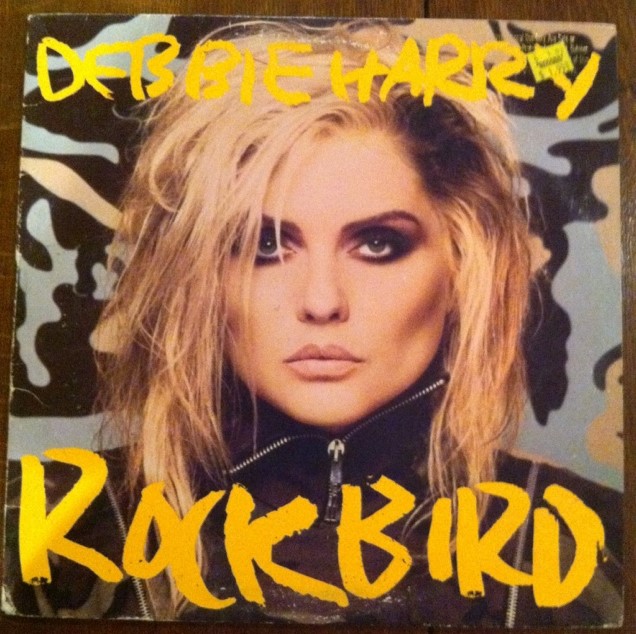 Cover art for Rockbird: front cover, back cover and inner sleeve. Lettering for all of these was done in 4 different colours. Picture and background painting are always the same. Photography: Guzman. Pictures of the albums: Frank Edwards, warholcovers.com 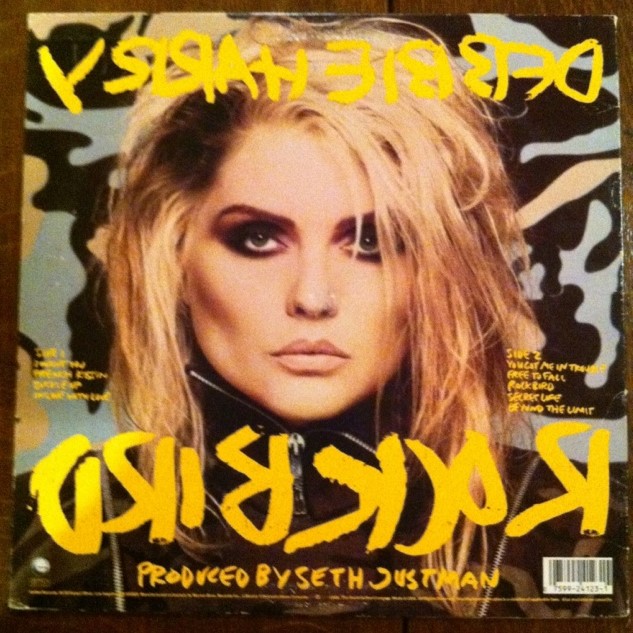 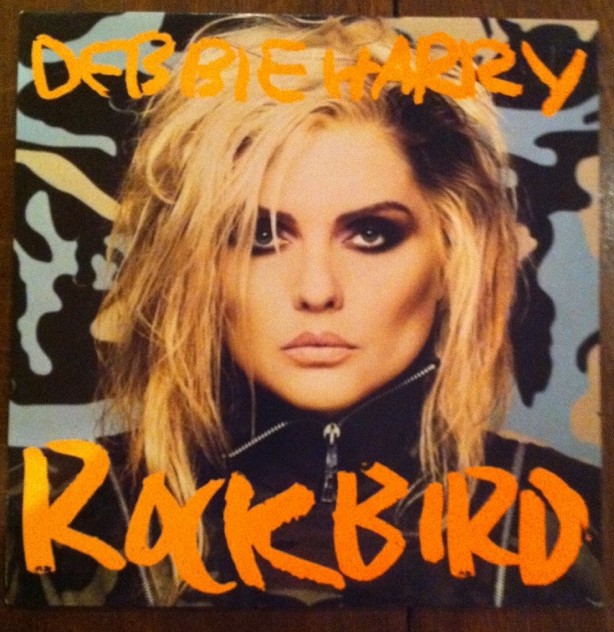 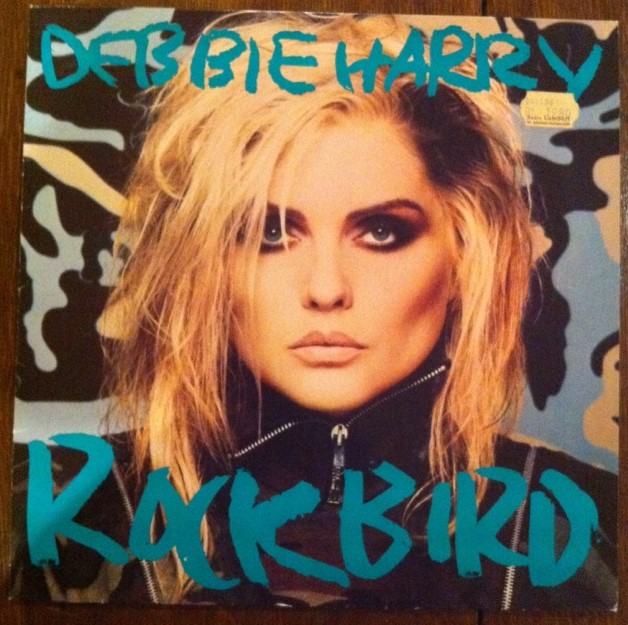 Stephen Sprouse (1952-2004), fashion designer, former roommate of Debbie Harry and a friend of Warhol’s, got the permission to design a clothing line based on Warhol’s camouflage series, in day glo colours. Together they designed some outfits for Deborah Harry, to wear for the album cover and in video clips for the album’s hit singles.

Warhol and Debbie Harry are talking abouth the videos and the clothing in an episode of Warhol’s 15 minutes on MTV (starts at 2:20). In fact Harry is wearing one of the dresses in the show, and Warhol signs it.
They are talking about the video clip for French Kissin’ (in the USA). In that clip Harry is lying on a Warhol camouflage bed cover. (It will be in another clip, for In Love With Love, that Debbie Harry actually wears the dresses. The next post in this blog will cover this.)

The single French Kissin’ in the USA was issued with a few different covers.  In the US the cover had a black & white outline version of the Warhol painting (Geffen). 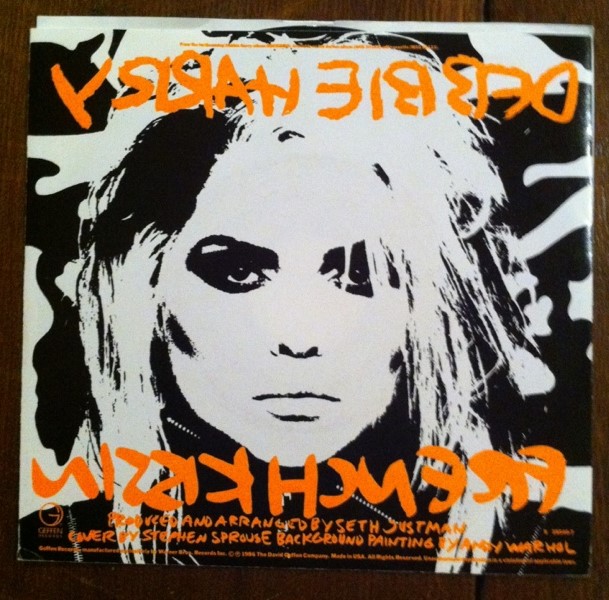 US single cover (Geffen). Back. Credit for the Warhol painting.

But the most interesting version was issued in the UK (Chrysalis), a 7″ record with a so called poster cover, which at that time were very en vogue in England. On this foldable poster a much larger part of the Sprouse/Warhol clothing design is visible. Also a point of interest: the layout of the poster was done by John Pasche, who at that time was creative director at Chrysalis Records. Pasche is best knows as the designer of the iconic Rolling Stones lips and tongue logo, first used on Sticky Fingers. At the back of the poster Pasche isolated and repeated Debbie Harry’s lips. Which was a very Warholian thing to do.

UK poster cover, back. Lips and layout by John Pasche. There is NO credit for the Warhol painting!

On Tumblr two absolutely fantastic pictures can be found of the Guzman photo session, in which also Deborah Harry’s face is painted in camouflage colours. These pictures, with the singer completely disappearing in the background, look a lot more aggressive. Maybe the idea was abandoned, because Harry already had a lot of explaining to do about the cover art for her first solo album KooKoo, on which the Swiss artist H R Giger pierced her face with large needles.
These pictures are, to use the words of a famous vodka campaign, ‘absolut’ Warhol. In 1986 Warhol not only painted the camouflage paintings an sich, but also made camouflage portraits of Joseph Beuys, of the Statue of Liberty, and camouflage self portraits.

Camouflage Debbie Harry. How more Warhol can you get? Photo by Guzman 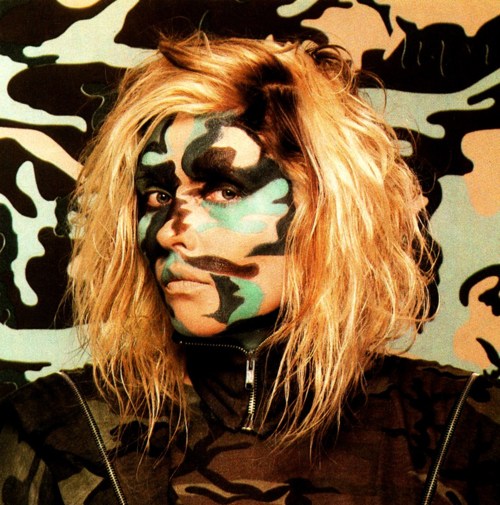